Hi
Does anyone know anything about Oakdale Mission in Birkenhead. I'd like to know exactly where is was - it could well have been on Oakdale Road but looking at Google Maps there isn't an obvious place for it to have been - Oakdale Road seems to be all houses. Apparently the Mission was damaged in the Liverpool Blitz but I'm not sure when it closed down. It was still open in April 1956 when my Grandfather (Andrew Mason) was alive as people from the Mission attended his funeral.
Oakdale Mission & Union Street Mission, also in Birkenhead, were both linked with Egremont Presbyterian Church in Wallasey (that church is now the Manor Road Church Centre).
I hope this query finds people with long memories or local history buffs!
Thanks
Posted By: bert1 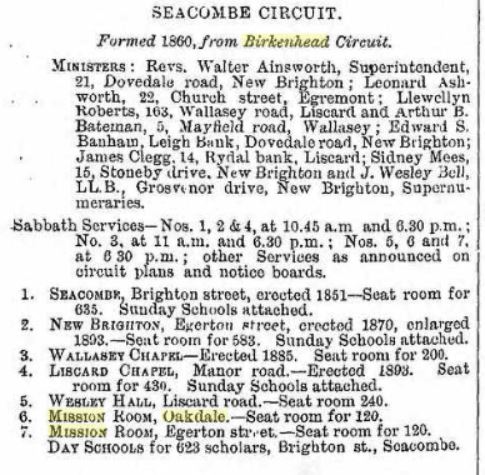 Thank you! I now know where it was.
I am still confused though. I have various copies of the Egremont Presbyterian Messenger, with that for April 1956 in front of me at the moment (It is the copy with Papa's obituary in it. His wife dies 15 days after him: her obit.is in the May 1956 edition.)
In both editions, underneath the list of officers of Egremont Church are listed the officers of firstly Oakdale Mission Church & then the Union Street Mission Church, implying to me that they were still linked together at that time.
Posted By: bert1

If anyone has access to FMP or British Newspapers online may be able to help.

I can't open the articles, only get a snippet of information.

The Oakdale Mission was indeed on the corner of Gorsedale/Oakdale roads , Wallasey and is still there although now a children's nursery I think.
© 2020 Wirral - wikiwirral.co.uk