Hi Guys, does anyone have details of where Cambridge Place was? According to census 1881, it was not far from Thomas Street, trying to do my family tree and need your help, thanks again, Jess
Posted By: bert1 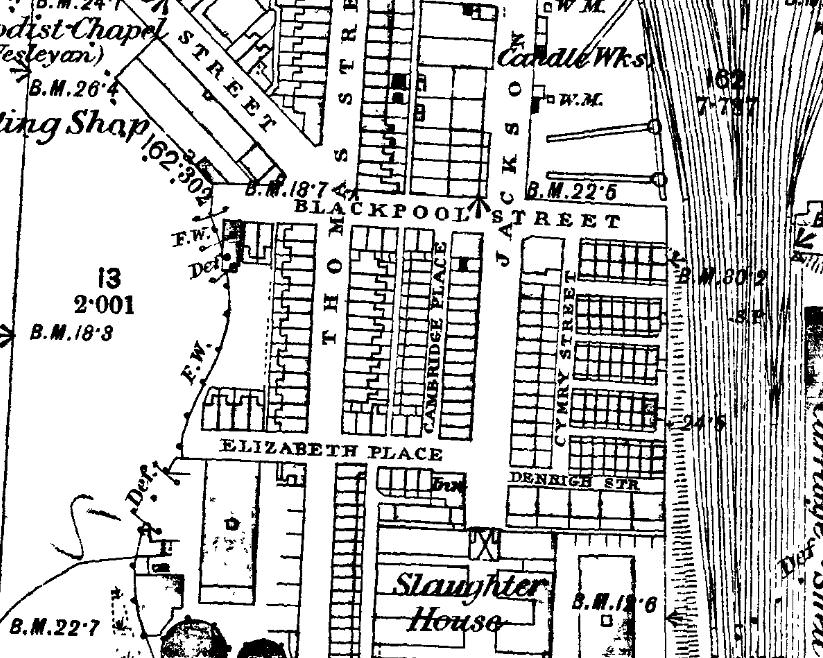 Though its not marked on this map, you can compare the area.

The Gasometers have just been demolished, having been there for a very long time,shortage of gas storage? pure coincidence. Those side by side maps are brilliant Bert1, thanks
Posted By: Excoriator

Things are not usually demolished until something else is going to be built there. Are there any plans for the old gasworks site? Old gasworks sites are often very heavily polluted, so may be unsuitable for housing.
Posted By: yoller

This is Cambridge Place on the 1875 Birkenhead Town Map.

The picture shows Elizabeth Place looking towards the junction with Thomas Street and the gasworks. I think the side street to the right, where the women are standing and sitting, is Cambridge Place.

I don't know the date of the picture, but it's probably early 1900s. 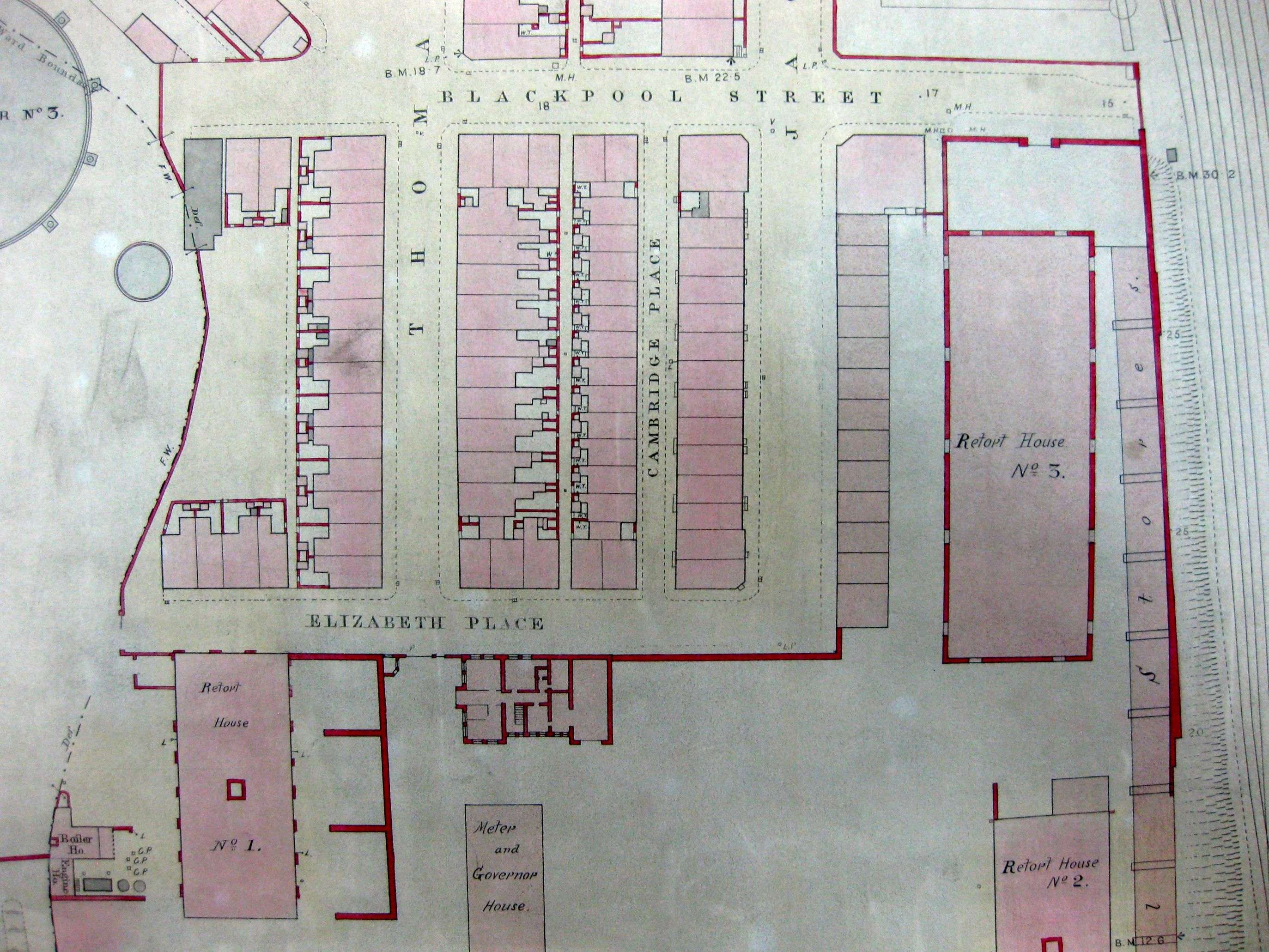 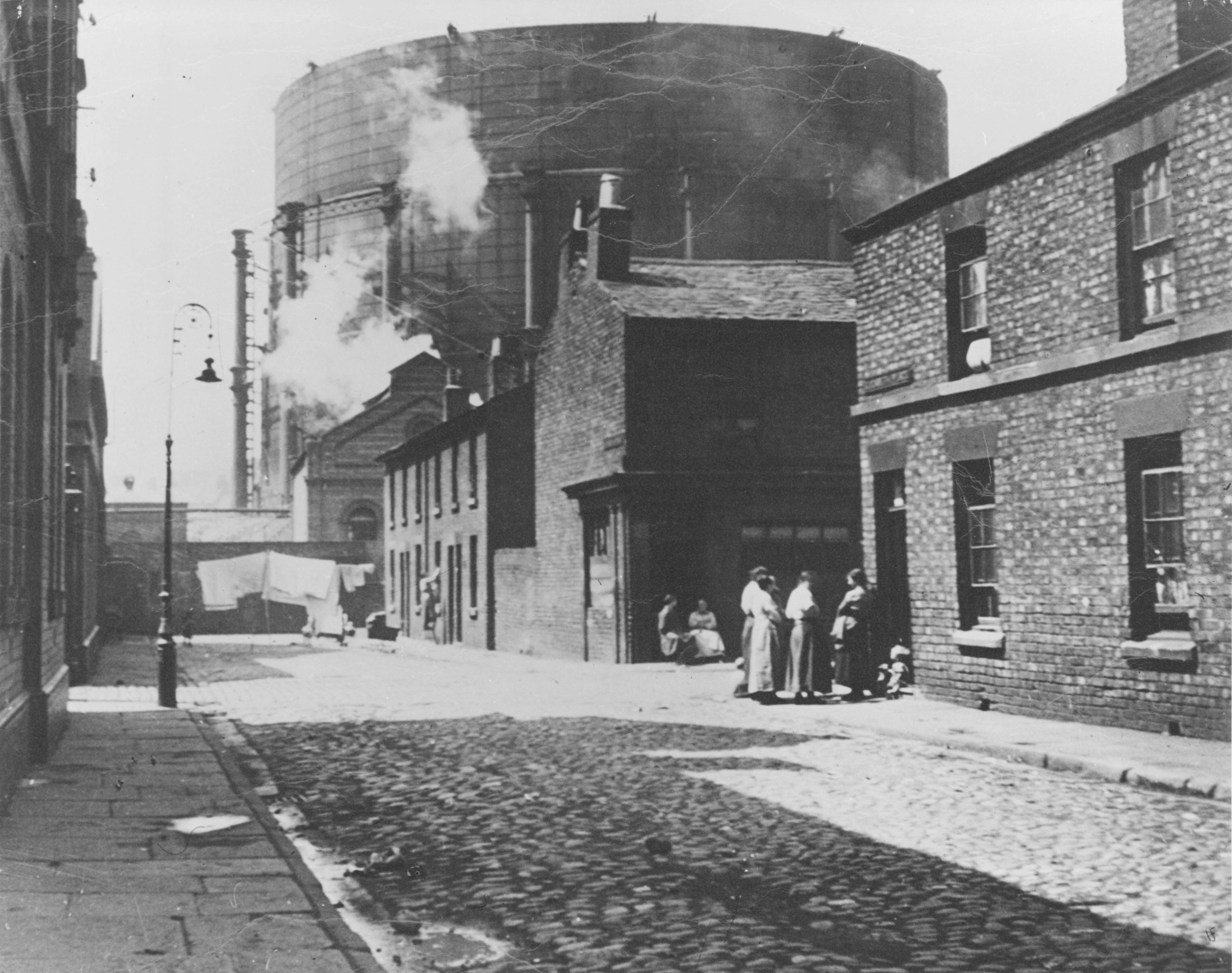 I think the women are on the corner of Thomas Street, behind the washing line is the Gasworks boundary wall, from there, there are 4 dwellings and the corner property, Thomas St.

I think those roads may have been built between 1861 and 1864, the streets, Thomas, Blackpool, Cambridge, etc. are not included in the 1861 directory. There's mention of a house fire in Cambridge St by the gasworks, Birkenhead, in the Cheshire Observer, 1864.
Posted By: yoller

Thanks for that, Bert. Looking at the map again, I think you're right. Cambridge Place would be further back on the right, out of the picture. But it does give you a good idea what the neighbourhood was like.

As your first map shows, there were originally slaughterhouses further down from Elizabeth Place, on the banks of the old Tranmere Pool. I've read that, along with the gasworks, these contributed to pollution of the pool, giving off an awful smell.
Posted By: bert1

A better view of the slaughter house and surrounding gas tanks, 1875 map. Couldn't have been a pleasant place to live, not sure they understood what pollution could do. The gas tanks on the map, near the slaughter house are not the ones recently demolished, I wonder when they went? I only have recollection of the 2 recently gone.

There's mention of Jackson Street, 1843, recently built in the papers and an unbelievable amount of butchers paying fines (Slaughter Houses) for selling or trying to sell contaminated and diseased meat. 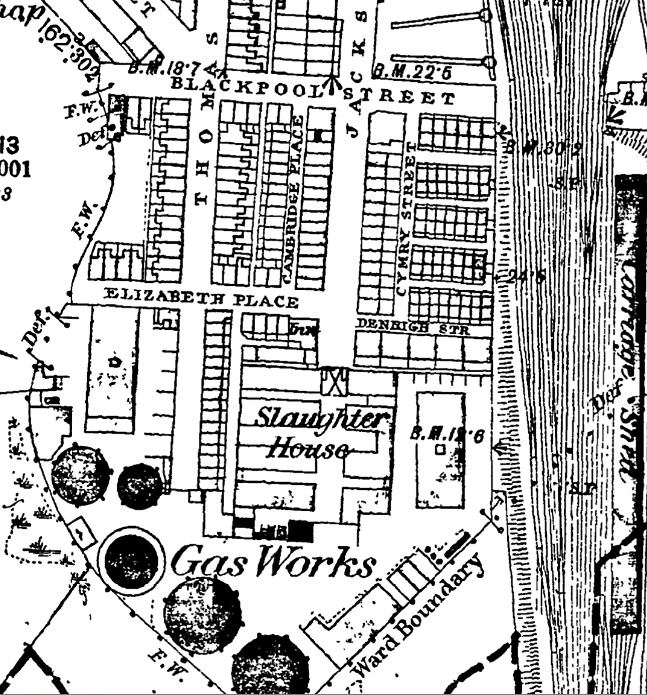 This is where I read about the foul condition of Tranmere Pool - Wikipaedia member Nightwalker posted this in 2011 in a previous discussion about the area ...

A guy called Ainsworth went wandering round Birkenhead in 1850 and wasn't too complimentary about Tranmere Pool:

"Returning up Price-street, which is another of "the grand streets," I found shops and houses unoccupied, with some unfinished and going to ruin. At the upper end there are indeed about thirty respectable houses occupied and in good condition, which looks quite remarkable here. On passing along I perceived a most villanous odour, something like gas, but much worse; and on asking my companion what abomination there was in that street to cause it, was informed it did not arise from anything in that street or near, but from a place called Tranmere Pool, nearly a mile off; and that the nearer I approached the nuisance, the more offensive I should find it, and that it pervaded at times the whole town, varying in intensity of stench according to the direction of the wind. On going to my friend's house, he gave me a report to read as to the sanitary condition of Birkenhead : from it I annex an extract,* and can only add, that from my own experience the effect produced by this monster nuisance" is not overdrawn.

* One monster nuisance, Tranmere Pool, I regret to say, is not at all likely to be abated, the opinion of the authorities being that it is of too great a magnitude to come under the Nuisance Removal Act; this said nuisance (in extent upwards of a quarter of a mile in length), nearly the whole of which is one continued mass of abomination, consisting of all sorts of decomposed animal and vegetable matter, and sending forth an effluvia of so offensive and deleterious a nature as often to make the houses in the neighbourhood, particularly in Clifton Park, almost uninhabitable. Unless the Nuisance or some other Act can strike at this fearful seat of pestilence, Birkenhead can never be considered as being in a proper sanitary state.'
Extract from Report of Dr. Hunter Robertson on the Sanitary State of Birkenhead, 1848.

There's some wonderfully descriptive words in there - you can almost smell it!
© 2020 Wirral - wikiwirral.co.uk