Does anyone have any info on Wood Lane also known as Granville Terrace, then name changed back to Wood Lane ? Wallasey Village not Greasby . Thanks.
Posted By: bert1

They both existed at the same time, the 1911 directory,

If you have access to the 1911 census and the 1911 Summary Books, both have been enumerated.

There is a Granville Court near the end of Wood Ln but this looks like a newish development.
Posted By: Wally1

Originally Posted by mikeeb
There is a Granville Court near the end of Wood Ln but this looks like a newish development.

Granville Court is a mid 60's ? sheltered development. I use to live in Granville Close, a 70's cul-de-sac behind Granville
Court. I assume both took their names from Granville Terrace. All in Wallasey Village behind the Farmers Arms.
Posted By: MikeC

Wood lane was a cobbled entry passageway between Granville Terrace and Marshlands Road. Before the second world war, it led to a small estate of bungalows. When a land mine fell in the area, the bungalows disappeared, along with Cosy Cosmo cinema, and about five houses in Granville Terrace. The cinema stood alongside the Farmer’s Arms pub. An off-shoot entry leading to Marshlands remains and still has its original cobbles.
Posted By: bert1

This map is 1899, Marshlands is to the left of Granville Terrace.

Mike, was the cobbled passage at the bottom of Granville? 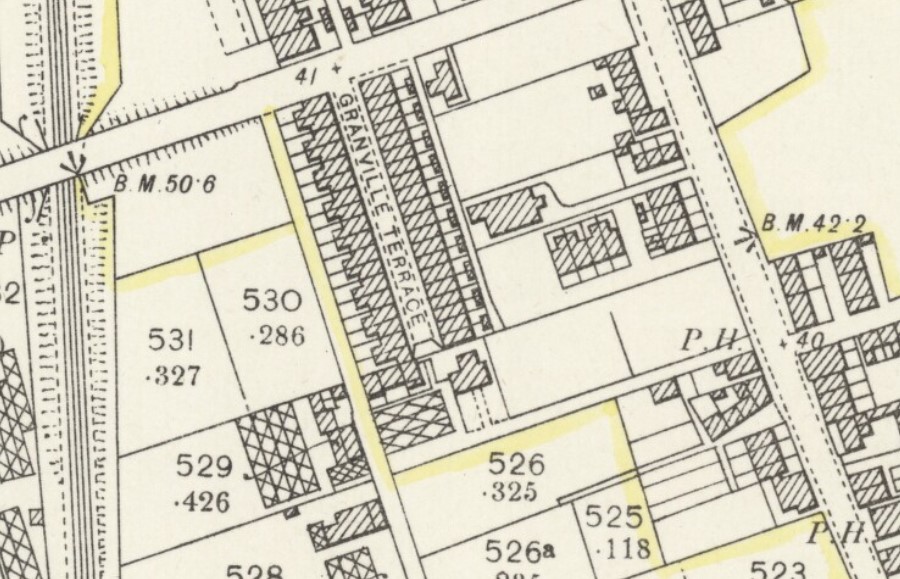 Hi Bertie
No, to your question. The old timers of Granville and Marshlands told me - Wood Lane ran from Green Lane, and was an access road to the to the bungalows directly behind Granville, which in those days ended abruptly at a large wall.
I seem to remember someone tell me there was a footpath from the bungalows to Wallasey village that came out alongside the Farmer’s Arms. The footpath became the access road to the Phoenix cinema car park.
What the buildings to the right of field 529.426 are I couldn’t tell you, but there were a lot of market gardens around Wallasey Village in those days.
Posted By: bert1

Could do with a 1881 ish map before Granville Terrace was there.
Posted By: diggingdeeper

I've also noticed that the current Wood Lane roadway isn't where the Granville Terrace roadway was, its further to the west.

Granville Terrace roadway ran through the front gardens of the existing houses on the east side of Wood Lane.

The current Marshlands Road that leads to Granville Court Residential Home is a brand new route even further west than the lane to the west of Granville terrace.

I'll do a graphic if you are as a confused by those words as I am.
Posted By: bert1

No, not confused, it shows like that on the side by side map, it all depends how accurate the duel mapping is?
Posted By: diggingdeeper

Originally Posted by bert1
No, not confused, it shows like that on the side by side map, it all depends how accurate the duel mapping is?

I checked by other reference points, it is accurate within a whisker, what is very helpful is the lane across the road on Green Lane which hasn't moved. The houses on the east of Granville Terrance are plumb on top of the existing houses on Wood Lane but Granville didn't have front gardens, they were direct on the street.

I'm glad you weren't confused, it took me about forty edit to get that right.
Posted By: bert1

Does this sound reasonable,

The 1911 directory has Wood Lane, Wallasey village, access to Wood Lane was from Wallasey Village Road, side of Public house.

Granville Terrace described in the directory as "No Thoroughfare", could explain Mike's brick wall, not sure when Granville was removed, it was still there for the 1939 register, so some time after that.

Depending when the Cinema was built, did this block off vehicle access to Wood Lane, if there ever was any?
Posted By: bert1

A bit of guesswork here, but I think we may have been putting the cart before the horse on this one.
After years of planning, they laid the railway through the existing market gardens in 1888. This would have meant market gardeners lost access to land on one side of the railway. To regain access to these gardens and greenhouses meant they had to open a private green lane (unmetalled rural route) through their own property from Green Lane itself. So, Wood Lane would have been there before they built Granville. Who knows, there could have been a small orchard or wood along the lane, hence the name. Nobody would have enough interest in purchasing road name plates. The Village was just a small community, and those who worked the gardens would have been aware of the lane.
The council of the time wouldn’t have adopted it, because it only gave access to gardens. And, when they built Granville and Marshlands, the council adopted that part of the lane, and cobbled it. I suppose it would have been too confusing to nameplate it, as it was now just entry access for the houses that ended at a private unadopted lane.
They could have built the buildings at the bottom of Granville to house the all year-round garden workers. Tied cottages were cheaper than paying the full rate for the job. In the harvesting season, lots of Irish came over as seasonal help. The other buildings look to me like Greenhouses, and storage sheds.
If you look at the picture on: -

You can see the pavement doesn’t continue from the end of the Cosmo, but starts again at the old Farmers Arms. The perspective seems to show a passageway, but seems smaller than the one nearest the camera (Wirral Villas).
The 'Cosy Cosmo' opened on the 12th May 1913
MikeC
Posted By: diggingdeeper

In the back of my mind I had been wondering if Granville Terrace were railway cottages, the railway company might have had to buy all the land and therefore utilised it?
Posted By: diggingdeeper

Originally Posted by diggingdeeper
I checked by other reference points, it is accurate within a whisker, what is very helpful is the lane across the road on Green Lane which hasn't moved. The houses on the east of Granville Terrance are plumb on top of the existing houses on Wood Lane but Granville didn't have front gardens, they were direct on the street.

Just to qualify this, the Cheshire Tithe are quite a bit inaccurate on the relative placement compared to the modern map, it was the NLS maps which I was referring to.

Wood Ln on maps today are the backs of the houses on Marshlands Rd and Wood Ln.
Where you access the front of the houses in Wood Lane there is a footpath that is also called Wood Lane.
Posted By: diggingdeeper

I din't make allowance for the nonsense the council get up to - there was a reason we used to have roads called things like "Back Wood Lane".

I didn't have access to streetview the other day to have a look.

The wall to the east of everything called Wood lane looks a fair old age!
Posted By: mikeeb

Here is an image from 1946 off 'Britain from Above' and you can clearly see that wall at the end of the Wood Lane footpath..
You can also see the 5 pairs of semi-detached houses on Mashlands Rd still standing today.
So if that footpath is Wood Lane, there is two roads between Wood Lane and Marshlands.
Which one is Granville and what is the other?

https://britainfromabove.org.uk/en/image/EAW001785
Obviously need to login to zoom in

The second row is the west side of Granville Terrace which are bang on top of the existing Wood Lane roadway.

Then there is a gap which includes the un-named lane which maintains right of way to houses further down.

The third row of houses is the east side of Marshlands road which may be the ones that still exist today, if so these were built before the west side.

The fourth row of houses are the west side of Marshland's road which as you say still exist today.

The more I look at this the more it looks like the un-named name was the original Wood lane which included the straight on extension and the 90 degree turn to Wallasey Village Road. Apart from Marshlands Road the rest was completely hashed up When the modern Wood Lane was created.
Posted By: mikeeb

I see your notes on BFA for clarity DD.

Originally Posted by mikeeb
I see your notes on BFA for clarity DD.

I always intend to do more on there but there just aren't enough hours, I also input on OpenStreetMap and edit Google maps.
Posted By: WinstonSmith

Nice pic Winston.
What year is it? It looks like it will be getting demolished not long after that picture, going by the amount already bricked up.
© 2020 Wirral - wikiwirral.co.uk