Thinking back to my youth, didn't the club that's just burned down used to be the "Classic Cinema", or even the "Empire" or was that the Dance Club ( Ballroom??), it used to be opposite the Pub "the Flat Iron" that gives my age away, it was a long time ago so I can be a bit vague, stll remember the price of the Beer though.
Posted By: diggingdeeper

Not sure which club burnt down, 1938 directory.

There was an Empire and Super. 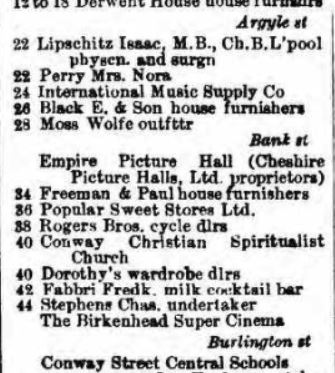 as Bert says the Super was further along, away from the Town Hall
Posted By: yoller

In the early Sixties there was a very popular music club called the Cubik in between the Majestic (Super) and the Empire. I think it later became the California Club and probably had several other incarnations. Anyone remember it? Unfortunately, I was too young to go in there.
Posted By: bert1

I remember the Cubic or Cubik, Yoller. If memory serves, downstairs in the cellar. Can't remember if I was doing a bit of underage drinking or it was an alcohol free occasion they let young whippersnappers in to.
Posted By: locomotive

Now my memory has been jogged, I remember the California Club. completely forgot about it..I also remember the Super being the Majestic, we used to have a few in the Flat Iron (Conway Arms) (because the beer was cheaper,) then go over to the Majestic. Oh Happy Days
Posted By: yoller

Here’s some background on the Super/ Majestic ...

… and some really good stuff about the Cubik (see Chapter 7) ...

Not knowing which club it was on fire, I managed drive past that row of buildings and noticed that it was now a flattened piece of land where once what was to me The Empire picture house, slices and once a lazer gaming site.Other names Classic cinema, Coliseum, the Fever bar

Derek, you had a misspent youth didn't we
Posted By: derekdwc

By the way, I think the Majestic only sold soft drinks, saying that, some young sailors went in once and gave me and a friend loads of spirits to drink which they'd brought in and never having drunk spirits before my friend and I ended up crawling up Argyle Street South .
It was the drunkest I've ever been and only god knows how I got home. I must have been 16/17 years old
© 2020 Wirral - wikiwirral.co.uk