Forums
Looking forward to this tonight, BBC1 7pm. Going to show Katmai Brooks Falls which is what I'm addicted to watching on the Explore webcams. Brown Bears congregate on the falls to catch salmon. Hoping my favourite ones will be shown they all have different personalities, as I say it's like a bear soap opera.If you like wildlife programmes one to watch.

Also looking forward to it, Cools. Thanks for reminder.
Disappointed with that Granny, thought they would have featured the bears of Brooke Falls, much more interesting. The salmon has been there for days now and we have seen a wolf that comes early morning and seen a mother bear chase it off. They tend to waffle on abit on these live shows don't they? Well hopefully next time they will get to the Falls and I'll like that better..
What a brilliant spectacle. Back in 2003 we were in Kamloops and saw the salmon run. Incredible.
Thanks, Cools for the heads up.

I have to agree with you Cools. Although as Salmon says, the footage was excellent but maybe ye and thee were expecting a bit too much. I do think they will go back to the falls. It seemed, as per usual with these things, the 'live' lasts for a few seconds and then they dart back to something they baked a little bit earlier. I had the 'explore.org' on at the same time.
I have just been looking again. It's a beautiful day there now. Young bears having a fish feast.
On again Wednesday, so let's wait and see.

http://explore.org/live-cams/player/brown-bear-salmon-cam-brooks-falls
I wonder if instead of real zoos we will end up with virtual zoos where you have control of drones and fly around these sort of places, or just loads of 360 degree cameras in place and you have virtual flights to view form any direction and place you want.

Google Earth's 3D view is a step in that direction where its attempting to recreate a 3D views from a few stills albeit not live - as yet.

Probably a good idea. Zoos are fine for some animals but not all. Consider the number of times a family visits a zoo, it could be once a year, or once every two/three. Far better to be able to watch the animals in their more natural habitats and environment, and far more educational in many respects.

Sad day in Florida as Snooty meets his end in an accident. He's spent 69yrs in captivity.
Watching these lovely little Cubs playing with stuff that people have been so careless with whilst watching from the platform. It's so annoying and bad for these little ones as of course they curious and have eaten bits. Humans seem incapable of not littering wherever they go.Annoying!!!! 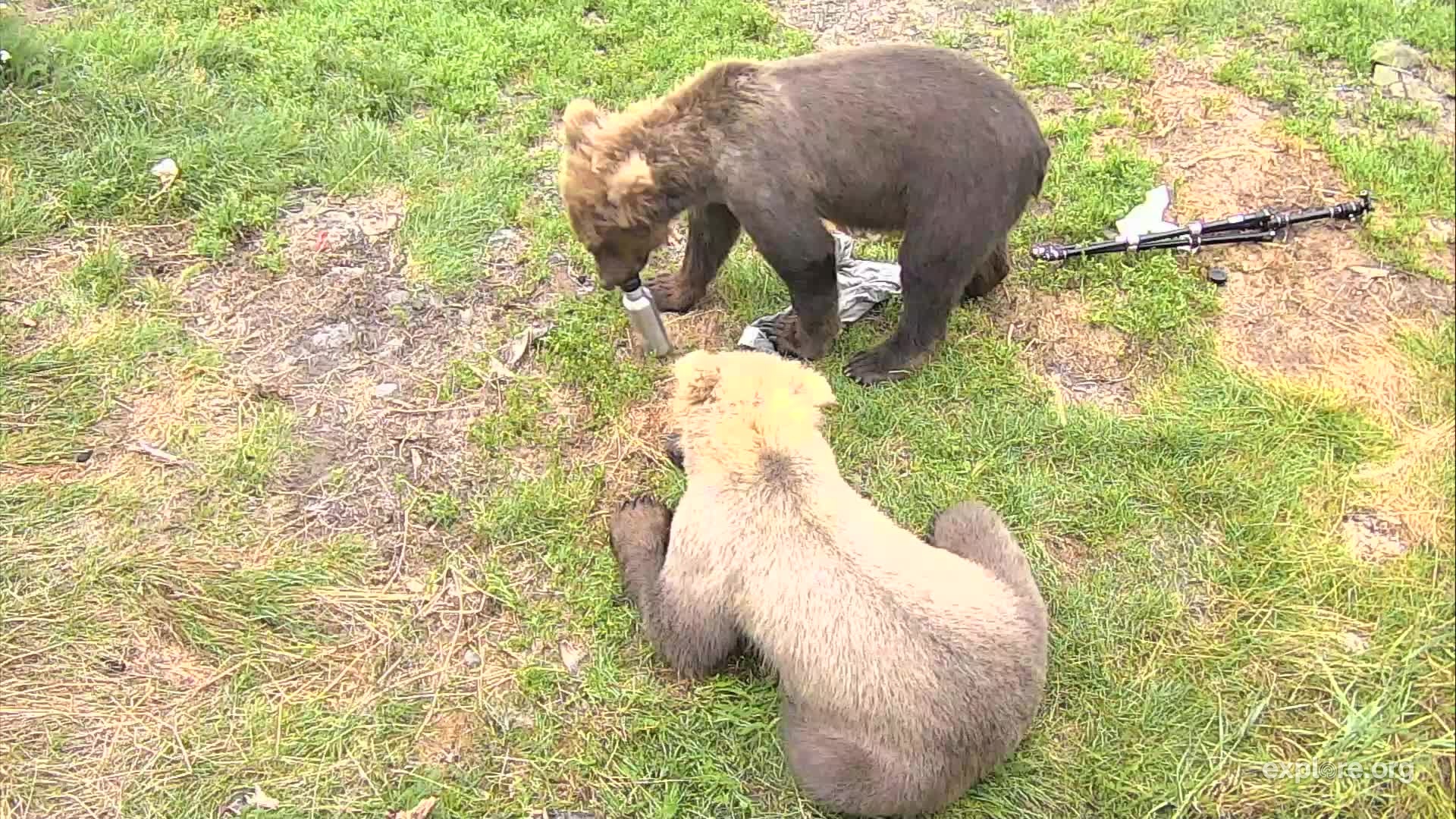 It wouldn't be the BBC would it ?

I would have thought that people would be monitored in that area, very closely. There's absolutely no rational when people behave like so and in a conservation area. Self absorbed, probably.
No it's coming from the Brooks Falls viewing platforms Granny, happening all the while , accidents I suppose but could be fatal for the Cubs. Up to now there's been a hat, shirt, water bottle, camera tripod, walking stick. Rangers can't pick up untill end of August when not so many bears about.Forumn folk going mad.

According to one post.. when they stopped counting Sockeye Salmon coming up the river on the 20 July, there was a total of 1,863,240. Wow, that's a lot of salmon !
They counted 59,000,000 (59 Million) of all kinds tonight, almost one for everybody in UK.
204 million expected to be harvested this year. Then again when you see humpbacked whales take 3,000 herring in one go your brain loses all sense of proportion. Truly we know so little of the natural world and the relationships between creatures. Everything really does have a place in the hierarchy and removing one layer has massive repercussions.
Showed some fantastic images especially the Whales, Alaska very magical and beautiful even though it can also be very hard and freezing. It's somewhere I would like to visit if I ever get the chance. I seem to be Abit obsessed with Alaska at the moment watch alot of the programmes on the people who live out there with hands over my eyes when they hunt and literally just butcher and skin the animals where they drop. That's what they have to do to survive no supermarket to visit. travel channel is where you'll find these programmes. Was very disappointed they didn't show Katmai Brooks Falls and the bears fishing there, they just catch them in their mouths amazing. Never mind I watch them daily. Worth taking a look Salmon if you enjoyed the Bears Granny put the link up in a previous post , I can't do it, never works for me ,bah!!
Thanks Cools, I have looked at Granny's link. A few years back (2009) while we are at our son's house we had a black bear and her cubs in the back garden (yard as the Canadians call it). They just roamed right across all the gardens and mother ended up in a tree opposite us. Turns out they were looking for one of the other cubs who had got separated. So sad that it ended up getting shot by the police just round the corner. It surprised me that they did not simply tranquilise it but apparently it is not that unusual there. All household rubbish bins are bear proofed.
That's a sad tale Salmon but must have been great to see them if not abit scary. Some people i have heard feed them thinking they being kind but it's terrible as they think they can approach and get easy meals usally ending in poor bears getting shot.
Really enjoyed last nights programme. It was better than Wednesdays, when the wolf seemed to dominate . The amount of fish is astounding , and I consider you to be very lucky to have visited and experienced what you did Salmon. ( not the poor old black bear incident though. )

We really are just tiny particles in an immense world of magnificence, unfortunately we are also the most dangerous. It was interesting to understand how the natives have managed their land and fishing for so long to meet with nature which continues to benefit them. We could do with looking at our own cock-ups and take a page out of their books.
Very lucky indeed Granny,cost me a packet! Well worth it though, seeing our distant family and the grandsons growing up.
No doubt that humans are far and way the most dangerous, wilful and non-wilful creatures on the planet. You only have to look at what happened in Yellowstone Park to realise just how balanced nature is until we come along with our killing machines and mentality and destroy that perfect balance.


Ha ! Don't worry about what it cost Salmon, do it while you can and those special memories will last much longer.

With regard to humans being the most dangerous and cruel , black bears and moon bears continue to be used in bile farms in their hundreds, if not thousands. Such a cruel industry and the worst of all are the Chinese. Dreadful and heartily sickening. I shall not put images up here to spoil this nice topic, but if anyone is interested , just google 'bear bile farms' and go to images. For 20 yrs their home if they survive.
Nine were rescued last month, but the agony will not disappear in the short term unless there is a total ban on such things. Plenty of petitions out there.
© Wirral-Wikiwirral