A bit different from the usual topics and I don't think this has been on the news. Quite dramatic footage .

Must have been terrifying in the dark like that especially.
Posted By: Clankie

The RN (& RFA) train hard and long for just this sort of eventuality. Bravo Zulu to all those involved.
Posted By: granny

She sank this afternoon..

French authorities have praised the efforts of HMS Argyll’s sailors for saving everyone aboard a blazing container ship.

All 27 crew of the Grande America were rescued from the merchant ship’s lifeboat in heavy seas off Brest in the small hours of yesterday morning.

The merchant crew, bound for Casablanca, were unable to halt the spread of fire which broke out in a container and were forced to abandon ship - only for their lifeboat to be damaged upon launch.

Returning from a nine-month Far East deployment, Argyll’s sailors and Royal Marines spent several hours on scene hauling the Grande America’s crew on board, before handing them over to the French for medical assistance and repatriation.

Although Argyll carried out the rescue of the 27 crew from the cargo ship, the French Navy co-ordinated the operation – and remained on the scene while salvage efforts were attempted.

“I would like to express to you our deep and warm thanks for the heavy help provided by the Royal Navy,” said Rear Admiral Arnaud Provost-Fleury.

“HMS Argyll did a tremendous job to recover so quickly in rough sea the crew who evacuated from MV Grande America, burning in the middle of Biscay.

“Once again, your close support and the so smooth and so fruitful cooperation with one of your warships and between both the French and British Maritime Operation Centres, were capstones of a perfect success to save 27 lives.

“I would like to ensure you of our deep and sincere gratitude.”

Argyll is now riding out Storm Gareth in Falmouth Bay before returning to Devonport on Friday, where 900 family members and friends are expected to greet her.

The Grande America continued to burn through most of yesterday and today and her list worsened. 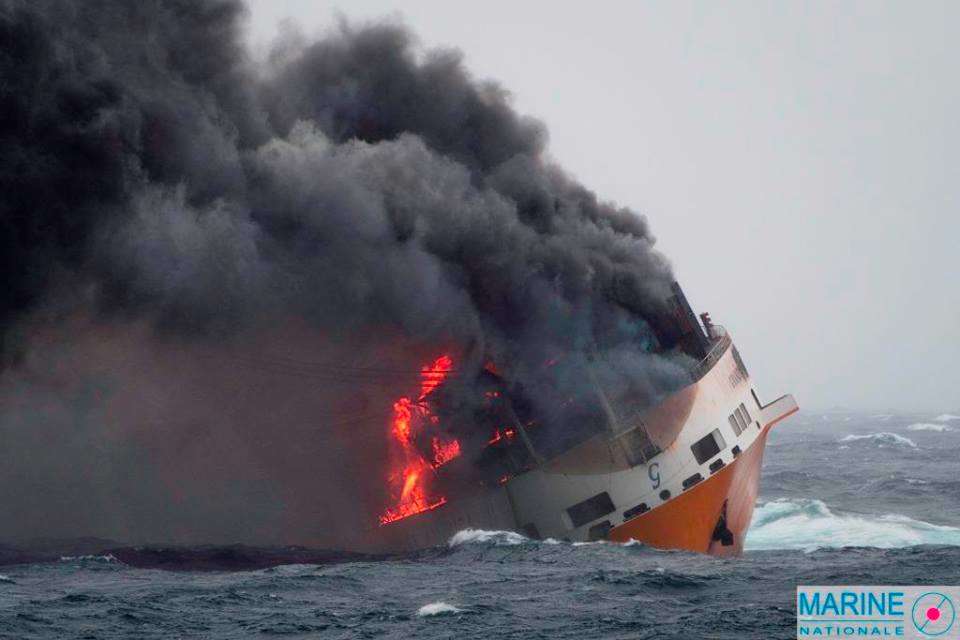 Thank goodness everyone got off. Sounds like those involved in the rescue worked well together. Wonder what happens to the containers that have gone down to the depths, Was it said what they contained ?
Posted By: granny

Not mentioned as far as I know, Venice, but they should have been well insured.
© 2020 Wirral - wikiwirral.co.uk